This wide-ranging study provides fascinating insight into, and analysis of, the history and practice of suicide across a range of cultural and historical contexts. The book takes the reader on a methodical and thorough journey through the subject matter: it is divided into two main sections dealing with Western and Eastern perspectives respectively, and into further subsections that take into account questions such as religious and spiritual beliefs about suicide, national contexts, and some theoretical approaches to the study of fluctuations in the suicide rate over time.

It will be of particular interest to scholars of sociology, of the history of death practices in Europe and the West, China, India, Japan, and the Middle East, and of cultural perspectives on death, suicide, attitudes toward and treatment of the body. It will also appeal to non-academic readers with an interest in any or all of these subjects; it is an informative and well-structured text. In the Introduction, Barbagli places his study within a sociological context, by explaining the ideas of the French scholar Emile Durkheim — He explains in the opening paragraphs that the study was motivated by the shortcomings of Durkheim's theory on suicide, which has been widely held as the foremost such theory in sociological studies, which "is very useful as a way to explain changes in the suicide rate over time and space, the differences between historical periods, countries and social groups.

However… it could not account for the unexpected new trends that had appeared in many countries" 1.

Different types of suicide are identified: egoistic; altruistic; aggressive; and as a weapon — each according to the intentions of the individual carrying it out 5—7. The author returns throughout the book to the limitations of Durkheim's theory, which is centred around two main factors: social integration, and social regulation 1 , within each of the presented case studies.

This gives Farewell to the World an overall coherence that complements its highly interesting content.

He provides plentiful statistical data alongside an engagingly-written verbal analysis of the chosen areas. The first section of the book focuses on Europe and the West. 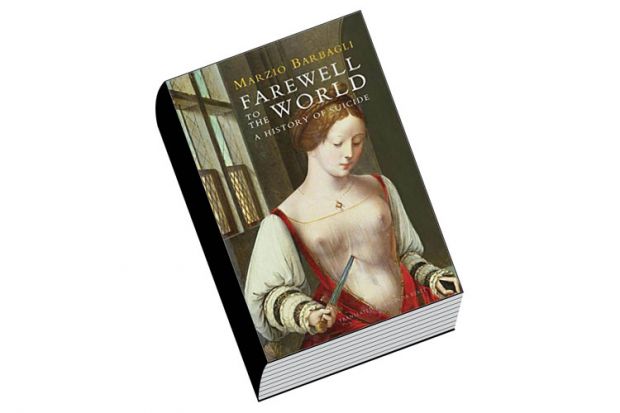 Its scope is wide-ranging, encompassing a period from the Middle Ages through to the early twentieth century. The author examines trends in suicide with the aim of identifying cultural and historical factors that could account for the rise in the number of voluntary deaths, which was noted by nineteenth-century intellectuals. Barbagli gives a review of pre-Christian and [End Page ] early Christian beliefs about suicide before moving on to give detailed attention to legislative perspectives.


He identifies a period during the mid sixteenth and seventeenth centuries, when "Christian ethics on suicide showed the first signs of crisis, in cultural elites, at least" 72 , and a shift in beliefs became visible in the public realm. Farewell to the World : A History of Suicide. Average rating: 0 out of 5 stars, based on 0 reviews Write a review.

Farewell to the World

Professor Marzio Barbagli; Lucinda Byatt. Walmart Tell us if something is incorrect. Out of stock. Get In-Stock Alert. Delivery not available. Pickup not available. Product Highlights About This Item We aim to show you accurate product information. Manufacturers, suppliers and others provide what you see here, and we have not verified it. See our disclaimer. What drives a person to take his or her own life?

Why would an individual be willing to strap a bomb to himself and walk into a crowded marketplace, blowing himself up at the same time as he kills and maims the people around him? Does suicide or 'voluntary death' have the same meaning today as it had in earlier centuries, and does it have the same significance in China, India and the Middle East as it has in the West?

How should we understand this distressing, often puzzling phenomenon and how can we explain its patterns and variations over time? In this wide-ranging comparative study, Barbagli examines suicide as a socio-cultural, religious and political phenomenon, exploring the reasons that underlie it and the meanings it has acquired in different cultures throughout the world.

Barbagli proposes a new account of suicide that links the motives for and significance attributed to individual actions with the people for whom and against whom individuals take their lives. This new study of suicide sheds fresh light on the cultural differences between East and West and greatly increases our understanding of an often-misunderstood act.

It will be the definitive history of suicide for many years to come. Specifications Publisher Wiley. Customer Reviews.

Write a review. See any care plans, options and policies that may be associated with this product.